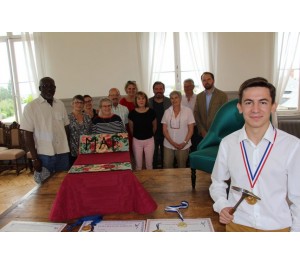 A youngster from Bourgtheroulde is double best apprentice in France

He is a young man who lives in Bourgtheroulde (Eure) , a boy who at 18 has already distinguished himself by his rigor and his technique.

At the end of his 3rd year, at Jean de la Fontaine College in Bourgtheroulde, Nathan Lesueur completed a CAP in upholstery at the headquarters in Brionne, at Lycée Boismard. Then, at the end of this course, he developed his know-how by learning decorative upholstery.

In this demanding discipline, which he naturally wants to make a profession of, Nathan Lesueur has his little preferences:

“I am passionate about the Napoleon III style, armchairs and beautiful fabrics. I collect a lot of things from that period ”.

This passion is a true vocation born in Bourgtheroulde, during a third year discovery course, carried out with a craftsman, William Beaumesnil.

As humble as he is talented

Before opening a store and embarking on this profession he loves, Nathan Lesueur will take a professional baccalaureate. He will study at the Lycée Victor Lépine in Caen (Calvados).

Obviously as humble as he is talented, Nathan Lesueur is the pride of the town where he grew up. When the members of the city council discovered his career marked by such success, they wanted to salute him by organizing a small ceremony at the town hall.

Friday July 12, 2019 , Nathan Lesueur came, with the two achievements that allowed him to stand out. The city council offered him two tools related to his trade, two ramponneaux from a company based in Romilly-sur-Andelle, Vergez Blanchard.

William Beaumesnil, his third year internship supervisor, and Sandrine Gauthier, a teacher at Boismard high school, came for the occasion. They didn’t hide a certain pride.

“At town hall we found out who Nathan was through the voter card for the European elections. He is a very discreet person and it was his mother who made him tell us that he was among the best apprentices in France ".

His mother, Sophie Lesueur was present for this small ceremony and confided that Nathan has always been a good student. Considering his background, it would indeed be difficult to doubt.

Article to find on: https://actu.fr/normandie/